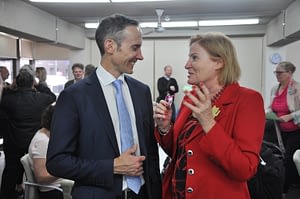 Churches Housing attended a roundtable, hosted by Leigh and Owens, in May to meet local community organisations and to lobby for affordable housing for all.

Dr Leigh, member for Fenner, and Owens, member for Parramatta, both spoke about worrying trends.

Owens added that rates of volunteering and donations rates had dropped in recent years.

The Reconnected roundtable, held at Parramatta Mission, encouraged Western Sydney charities and not-for-profits to exchange ideas about ensuring that communities have stronger bonds and louder voices.

The Parramatta meeting was the 11th such roundtable – others have been held in Sydney, Perth, Brisbane, Canberra, Melbourne, Adelaide, Newcastle, Launceston, Hobart and Darwin. Representatives of more than 1000 Australian charities have attended so far.