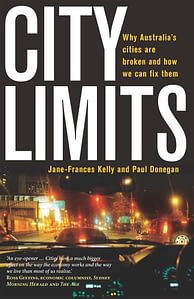 An important look at the difference between the legend of how Australia sees itself, and the reality that we are faced with. A very readable text that uses well explained data, as well as real and personal case studies of different people and their lived experiences of Australia’s cities and surrounds.

The divide between where people live and work in Australian cities is growing, with most new jobs being created close to city centres while most population growth is occurring in the outer suburbs, according to a new book from the Grattan Institute.
City Limits: why Australia’s cities are broken and how we can fix them shows that more than half the employment growth in our five largest cities is occurring less than 10 kilometres from the city centre.
But a dysfunctional housing market means not enough homes are being built in these areas, forcing more than half of all population growth into suburbs more than 20 kilometres from the city centre.
In large outer areas of Australia’s biggest cities, less than 10 per cent of all jobs in the city can be reached in a 45-minute drive. City Limits shows the costs of this divide include heavy traffic congestion, long commute times and a big drop for many city residents in the quality of family and social life. One in four full-time employees in Australia’s big cities spends more time commuting than with their children.
The divide is also financial: the average full-time job located 20 kilometres or more from the centre of Australia’s five big cities pays $56,000 a year. Within 10 kilometres of city centres, the average full-time job pays $77,000 a year.
City Limits argues that the failure of the Australian housing market is creating a divide between older homeowners and a younger generation that is either locked out of home ownership or pushed to the fringes of cities, far from jobs and good transport.
Meanwhile a new army of renters – one in four households – are forced to live in some of the most insecure tenancy arrangements in the developed world.
“Cities are the engines of our economy, producing nearly 80 per cent of national income, yet
policy-makers must address failures in housing, tax and transport to ensure our economic and social future,” says City Limits co-author Jane-Frances Kelly.
“We’re a nation of city dwellers. Our future prosperity depends on thriving cities offering good jobs and opportunities to everyone living in them.”